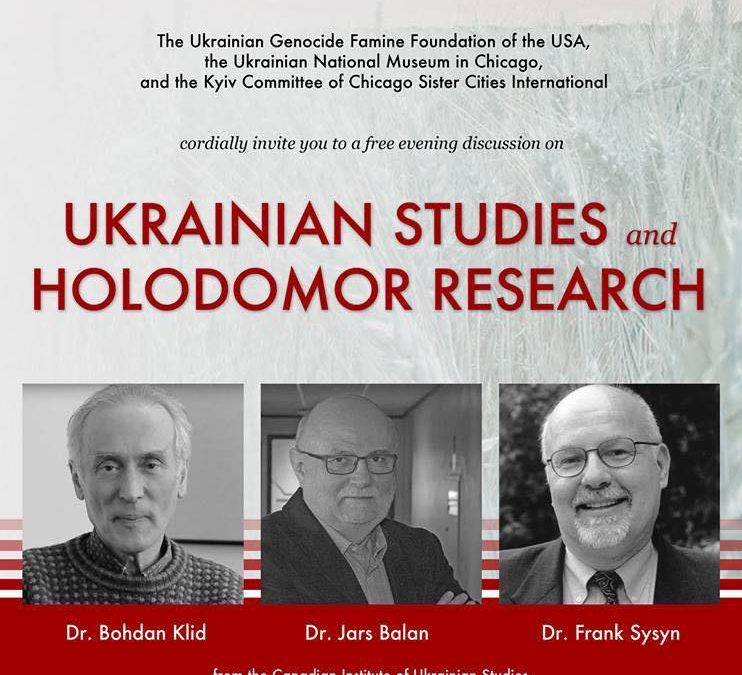 The Ukrainian Genocide Famine Foundation of the USA, The Ukrainian National Museum of Chicago and the Kyiv Committee of Chicago Sister Cities International invite you to a presentation by scholars from the Holodomor Research and Education Consortium (HREC) at the Canadian Institute of Ukrainian Studies (CIUS). The scholars, all associated with the University of Alberta, are in Chicago to attend the annual conference of the Association for Slavic, East European, and Eurasian Studies, where they will be making presentations.

Frank Sysyn is Director of the Peter Jacyk Centre for Ukrainian Historical Research, Canadian Institute of Ukrainian Studies, and Professor of the Department of History and Classics at the University of Alberta. He is editor in chief of the Hrushevsky Translation Project, overseeing the translation into English of Mykhailo Hrushevsky’s 10-volume Istoriia Ukrainy Rusy. He also heads the executive committee of the Holodomor Research and Education Consortium. Dr. Sysn is co-editor with Andrij Makuch of Contextualizing the Holodomor (2015) and with Andrea Graziosi of Communism and Hunger, Studies (2016). He will speak on the place of Ukrainian Studies in the context of Slavic, East European and Eurasian Studies, past and present.

Bohdan Klid is the Director of Research of HREC at the Canadian Institute of Ukrainian Studies, University of Alberta. He is the author of articles on Ukrainian historiography, Ukrainian popular music and politics, and on the Holodomor. He is co-editor with Alexander Motyl of The Holodomor Reader: A Sourcebook on the Famine of 1932-1933 in Ukraine (2012). His presentation will focus on HREC’s research and publication projects: memoirs from the Ukrainian Cultural and Education Centre of Winnipeg (Oseredok); the Holodomor accounts gathered by Ukrainian writers Volodymyr Maniak and Lidia Kovalenko in 1989; and HREC translation projects, including the publication in English of scholarly writings by Ukraine’s scholars. He will also mention HREC’s efforts to engage scholars and students to study the Holodomor through the organization of conferences, workshops and a program of research grants.

Jars Balan will discuss the life of Canadian journalist Rhea Clyman, one of the few reporters to witness and write about the Ukrainian Famine of 1932-33 (the Holodomor. At the age of 28, she made a journey by car through the agricultural heartland of the Soviet Union just as the Holodomor was beginning to exact its terrible toll. Mr. Balan will also mention other work by Canadian journalists who wrote on the Soviet Union during the Famine years.