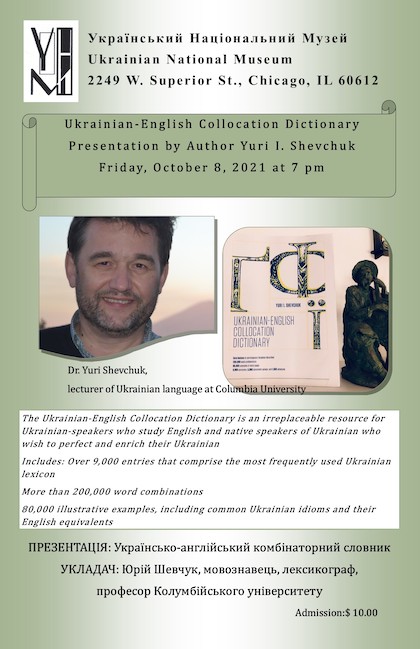 About the author.
Yuri Shevchuk is the lecturer of Ukrainian language at Columbia University’s Department of Slavic Languages and the Harriman Institute. He holds a Ph.D. in Germanic Philology from Kyiv State University (1987), and MA in Political Science from the New School for Social Research (1996). In 1990-1993 and 1996-2012 he taught Ukrainian at Harvard University Summer School. He also teaches Ukrainian at Yale and Cornell. Yuri Shevchuk has published in the US, Canadian, and Ukrainian press and on the Internet on issues of Ukrainian language, identity, culture, Ukrainian and world cinema. He authored Beginner’s Ukrainian with Interactive Online Workbook, Hippocrene Books, 2011, 2013, 2016, a popular textbook for university students and self-learners worldwide. His pamphlet Linguistic Schizophrenia. Whither, Ukraine?, 2015, Diskursus (in Ukrainian) provoked an national discussion in Ukraine. His recent article “Language in Contemporary Ukrainian Cinema” is the first ever in-depth study of how language has been used in Ukrainian Soviet and post-Soviet film as a tool of Russian colonialism. Dr. Shevchuk is the founding director of the Ukrainian Film Club of Columbia University, the only permanent forum of Ukrainian film outside Ukraine since 2004. He is a recognized authority in Ukrainian film studies. Dr. Shevchuk is a member of the Ukrainian National Filmmakers’ Union and the Ukrainian Film Academy.
Dr. Shevchuk has extensively lectured on Ukrainian language, culture, and film at leading US, Canadian, Italian, Spanish, Polish, and Ukrainian universities.
His latest book the Ukrainian-English Collocation Dіctionary, Hippocrene Books, New York, N.Y., 2021, 1,000 pages, is a breakthrough in the Ukrainian language pedagogy and has no precedents in Slavic or English lexicography.