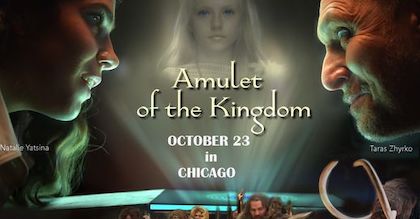 “Amulet of the Kingdom ” goes on a tour across the cities of the Canada. The authors will present the film, and explain the route they took to  create this film.

Synopsis: A film group from Canada, led by a young journalist Sophie come to visit a  Ukrainian professor of archeology. Their goal is to record an interview about the best-selling book, “The Amulet of the Kingdom”, which the professor has worked on most of his life. The book intertwines legends and facts, evidence and assumptions. The professor claims that the Ukrainian nation originated in the time of the mammoth hunters and continued its formation in the days of Trypillia and Kyivan Rus. Journalist Sophie is trying to understand how the world will react to such a discovery by a Ukrainian scientist. However, her interest hides something much more important for both of them. Ancient experiences and painful losses, seemingly securely buried under layers of time, hatred and deep resentment – all come to light. Will the professor and Sophie be able to understand each other, and most importantly, will they be able to forgive themselves.