It is with sadness that we bid farewell to 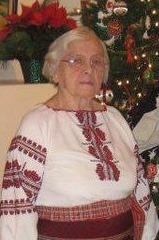 Pani Slavcia was the UNM’s longtime secretary and later volunteered as the museum’s greeter, until her 90th birthday.

from Starij Sambir to Budapest, Vienna, the Displaced Persons camp in Regensburg and immigrated to Chicago

where she spent ¾ of her long and fulfilling life.

and active in the UNWLA. Family, religion and work played an important role in her life, but she always found time to take in nature, play volleyball, garden and read. She was composed, soft spoken, and enjoyed a good laugh.

We love and remember her fondly. May she rest in eternal peace!

The family requested that in lieu of flowers consider donating to the Ukrainian National Museum.

In Memory Donation for Myroslava Batorfalvy