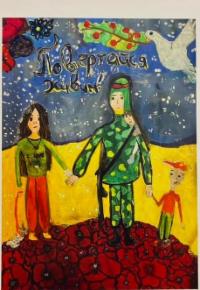 The exhibition is part of the joint Polish-Ukrainian project, featuring children’s art made in Poland during World War II and the German occupation from 1939 – 1945. This is juxtaposed to children’s art from Ukraine created during its current war with Russia and collected through the

The exhibit illustrates how children see war. Everyone suffers because of war, however, in different ways. Often war disrupts family love, care, and compassion, and individuals find themselves lost on the streets. Yet some people and places take them under their wing – the orphanages.
All donations will go to the Ukrainian Women’s Association of America (UWAA) – a non-profit organization whose mission is to help provide Ukrainian children with the happy, healthy childhood they deserve. UWAA is actively supporting the City of Goodness in Chernivtsi, Ukraine, which offers shelter, counseling, support, and love to orphans, single mothers, their children, and even family pets.
The legion of Young Polish Women will also be on hand to offer their support and discuss how they have helped Ukrainian refugees.
The Academy of Music of the Paderewski Symphony Orchestra and the Ukrainian Vocal Group “Elegia” will provide musical interludes.
This exhibition is made possible through the good grace and assistance of the Consulate General Republic of Poland in Chicago, the Polish Museum of America, and the Consulate General of Ukraine in Chicago.