A Concert by the Lincolnwood Chamber Orchestra 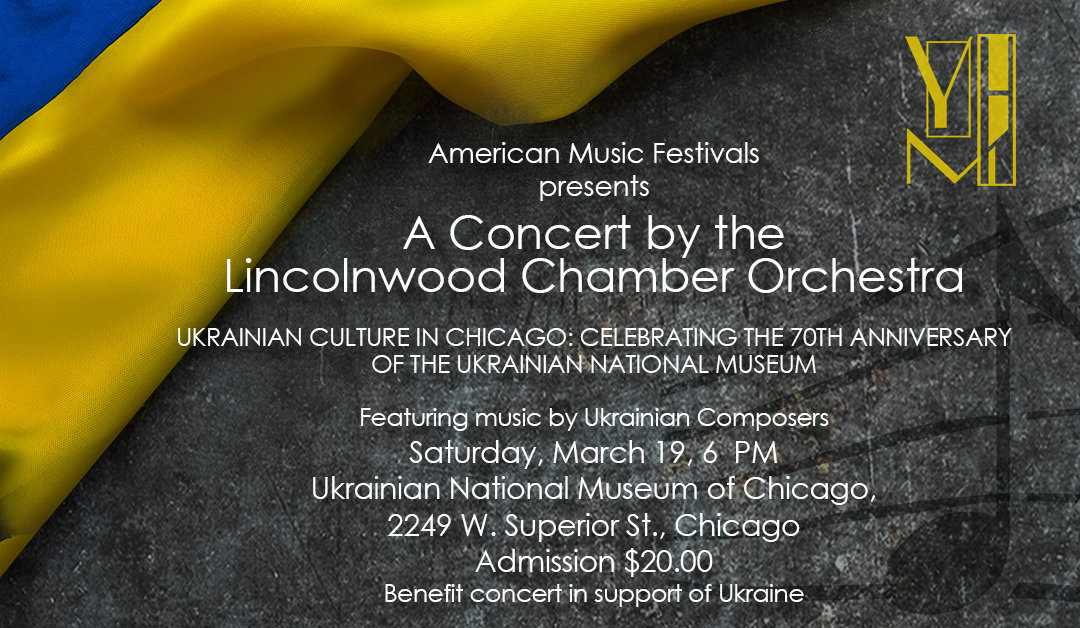 UKRAINIAN CULTURE in CHICAGO: Celebrating the 70th Anniversary of the Ukrainian National Museum

Saturday, March 19, 6:00 PM at the Ukrainian National Museum of Chicago,
2249 W. Superior St., Chicago. 312 421-8020. Tickets: $20.00 Proceeds will benefit Ukraine
Order tickets here https://ukrainiannationalmuseum.app.neoncrm.com/eventReg…&
Please check your SPAM FOLDER for an acknowledgment of your ticket purchase and bring it along.
AMERICAN MUSIC FESTIVALS: WELCOMING THE SPRING
Reaching out to Chicago Communities in Friendship Through Music American Music Festivals presents a concert by the Lincolnwood Chamber Orchestra, Saturday, March 19, 6 PM at the Ukrainian National Museum of Chicago, 2249 W. Superior St., Chicago.
A nonprofit committed to cultural exchange for over 20 years, American Music Festivals has collaborated with organizations in Chicago and around the world to create musical programming that promotes diversity, empowering and bringing communities together.
On March 19, “Ukrainian Culture in Chicago,” will feature Ukrainian composers Mykhaylo Verbytsky, Dmitri Bortniansky, Mykola Leontovych, Mykola Lysenko, Fydor Akimenko, Sergei Prokofiev, and Quincy Porter’s “Ukrainian Suite.”
In these difficult times when Ukraine is bombarded and destroyed by Putin, the Lincolnwood Chamber Orchestra and American Music Festivals stand in solidarity with Ukraine, providing music to bring some solace to everyone’s hearts. The Ukrainian and American music program is hosted by the Ukrainian National Museum of Chicago, which is celebrating its 70th Anniversary this year. American Music Festivals previously explored cultural connections with Ukraine in its 2017 “Kupala” concert in Chicago by the Lincolnwood Chamber Orchestra, which featured the music of Ukraine, Poland, Belarus, and the USA.
Through sharing cultures in communities, American Music Festivals believes that we can all come together through the beauty of music.
Seating is limited at the upcoming concert on March 19 at the Ukrainian National Museum.